One of my favorite things about fall is layering up and walking around my neighborhood. My husband and I decided to test out a new lens recently and captured many nature shots and close-ups before realizing that it was a little too cold for this. Once inside, I decided to bake a yummy blueberry pound cake, light some candles and bundle up. Fall is one of those seasons during which I enjoy being outdoors as much as I do staying in!

Like a lot of shoppers, I’ve  been searching for the perfect basic tees for many years. I currently own two scoop-neck tees by James Perse (via TJ Maxx) and two v-neck tees from Madewell. The James Perse tees are very soft and have lasted for at least two years. My only concern with the style I chose was that since it’s very slim, I don’t have much room to be bloated/ out of shape. Obviously no one plans to be bloated, but when it happens, I still have to wear clothes! On the other hand, the Madewell v-neck tees were very soft and long, but I already have holes in the pair I purchased about 4 months ago.

So recently, I decided to test out the domestic start-up retailer, Everlane.  At $15 a pop, I figured it was worth the try, especially since the tees are made in the USA. After reading reviews on other blogs, I settled on the xs white v-neck and xs grey v-neck. I usually wear size small or size 2 in most brands, size 0 in stores with vanity sizing (J Crew, Banana Republic, Ann Taylor), so based on my measurements and the Everlane sizing chart, I went with an xs.

The verdict: I really love the fit (tight up top, looser on the bottom) and the fabric (100% supima cotton) feels soft yet strong. I have broader shoulders, but the shoulders of the tees measured about 14.5 inches between the sleeve seams. So far, so good! I hope these last for as long as my James Perse ones have.

Check out the brand, Everlane! I haven’t bought any of their other items, but I would suggest reading more reviews before you buy.

In my opinion, this week has been one of the coldest weeks of the summer season. As I stepped out of my apartment wearing a bright orange sundress, it was clear that I didn’t quite get the memo.  So, to get into the mood for Fall, I’ve decided to post my favorite runway looks and trends for cloudy days and strong breezes.

I can’t get enough black and white. It seems to be my favorite color combination season after season, especially in dresses.

Though this is not a new trend, it is one that resonates with me, perhaps because of my heritage and love for geometric shapes. This season, I’ll look for dresses or separates with eye-catching prints, and combine them with simple accents and accessories. Also, I haven’t paid much attention to Peter Pilotto before, but this London-based design team’s work is incredible!

Both, See by Chloe

I find that as I build my “working woman” wardrobe, I’m attracted to pieces that look timeless, effortless and svelte. I think the apparent ease in the looks above is deceiving, however, since it takes some restraint to dress like a minimalist.

Lately, I haven’t been posting much about my progress with planning the wedding or about anything really.

To be honest, I had to take a break from blogging to focus on other areas of my life that need my attention (like searching for an apartment in a new city and study for my upcoming GMAT exam–2 more weeks to go!)

However, this doesn’t mean that I’ve put wedding planning on hold. On the contrary, my fiance and I have

Surprisingly, Neiman Marcus was the retailer with the best price! Unfortunately, now they’re all sold out. Anyway, the color of the shoes is very saturated and the laser work is superb. Also, they make my calves look great, though no one will be seeing my calves under my wedding dress haha. I will have to practice in them and break them in before the wedding, however, since they’re so high (4.5 inches with NO platform what-so-ever)!

Other wedding to-dos for May include:

I think we can do it, but I literally have no time!

The Gilt Groupe Warehouse sale from a few weekends ago was a really unique experience. I’ve never been to one before but I’m so happy I did!

Here’s what we found:

I also bought a book for the spring as I work on my resolution to read more this year. I’m currently wrapping up a book on consumer behavior called Consumerology and can’t wait until I get started on this one.

Whenever I think of bridal fashion, I typically don’t consider menswear. However, my guy is rather excited about what he’s going to wear, so I’ve dedicated this post to that! Unlike other brides, I don’t want to dictate what my s.o. wears to our wedding. Perhaps it’s because I trust his aesthetic and fashion sense. Anyway, he’s decided to wear grey, black and white.

This Suit with a better blouse.  [The Hugo Boss James/Sharp in Grey (he has it in navy)]

With these Shoes (Allen Edmond Strands in Walnut)

Thankfully he has the Strands, but we’ll have to purchase the suit (and probably a new shirt).

Regarding my attire, I still need to find my wedding shoes and accessories. We also have our engagement photo session scheduled and chose our outfits a few days ago.

Today I turn 23 and I couldn’t be more excited!

As gifts, I got a new dress from Diane von Fursternberg,  a brown pair of classic Stuart Weitzman pointy pumps and some freebies from Aveda and Sephora (join their birthday programs if you haven’t already!).

I avoided throwing a party or big dinner since I’m new to this city, but serendipitously a friend of mine decided to throw a Mardi Gras cocktail party tonight which should be a lot of fun.

This year, I’m going to focus on experiences with loved ones and growing as a young professional. I’m so blessed to have a job and great people around me; I just want to make sure that I enjoy it all!

I discovered this blog through Feather Factor, a blog that interviews fabulous women (including one of my favorite authors in fashion, Dana Thomas!). Stina seems to live a wonderful life in Europe with lots of travel, beautiful events and a happy family , but the reason I like her blog so much is because of her coat collection! I normally abhor winter weather/ anywhere cold, but if I could have coats like hers, that might make living in more northern climates possible. Check her out!

Last week I registered for my first distance race, the Athleta Iron Girl 5k. Though it’s only a 5k, I not used to running for more than two minutes straight since I was a sprinter in high school. This race is a huge deal for me and not only do I want to complete it, but I also want to get a great time.  I’m so excited to compete even though I won’t begin training until March! Between now and then, I figured it wouldn’t hurt to get some new gear. Anything to get me moving right?

I ordered this one for work, but I think it will also become my fitness bottle. It’s so sleek. I just hope this glass bottle’s coating is as durable as the manufacturer claims! 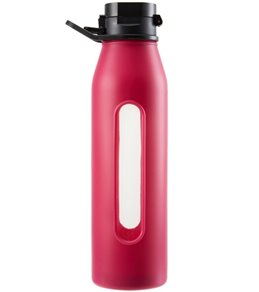 I’ve been using the same Nike shoes for everything over the past 4 and 1/2 years. They’ve seen me through my kickboxing days, running on the beach in Brazil and attempting to play tennis with my fiancé. Unfortunately, I’ve started to think that they’re too heavy/ boxy and I may be injuring myself when I wear them (this is never a good thing). Time for an upgrade!

I considered buying one of those arm straps for my current iPod, but since my arms will be working hard anyway, I don’t see why I should or would want to add any weight.

One of my uncles used to live in the Bahamas and brought fresh coconuts every time he visited us here in the States. I’ve tried Zico before and think it’s pretty delicious.

I have a couple of pairs of running pants, but I’ve always wanted capris. Also, I’ll be running in a warmer time of the year, so this purchase makes perfect sense. 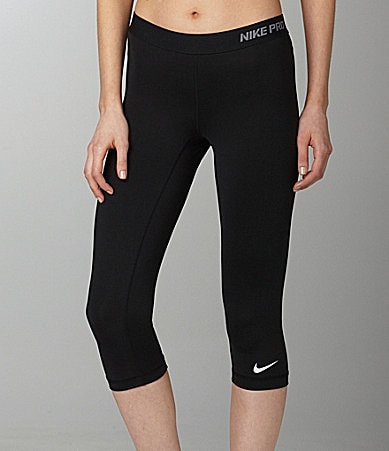 How cool is the Nike+ technology? Not only is it a watch, but it also functions as a pedometer, heart rate monitor, timer and calorie tracker, among other things.

Though I’m not building a workout wardrobe from scratch, I do have a very conservative approach. I’m sticking with black for my more frequently used items and injecting fun through my tops. By the way, I have a slight bias toward Nike since it was the brand my track team wore in high school!

2. A Christmas present from my future extended family

3. The most versatile, classic pair of shoes I own. These Elie Tahari beauties have taken me from dinner parties to the office.

4. The best smelling unisex fragrance. It’s New Haarlem by Bond no. 9. My fiance and I share it for special events and while on vacation.

In case you missed it…